Book Review: Who Goes There? by John W. Campbell 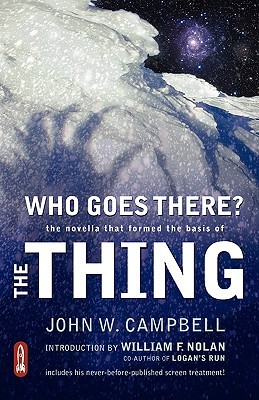 Who Goes There? by John W. Campbell – Available Here

It’s a novella that was the basis for a movie that apparently everyone but me actually saw in some form or another. That being said I’m not so disconnected from the cultural zeitgeist to be unaware of it’s existence, so I decided that in order to play catch up on my yearly reading pledge I’d dive into something small from the 1930s (it’s like cheating, but often times more racist).

If you’ve seen the movie, or even heard about it, you know the plot. I won’t be going over it because it does what countless stories have done since then (even this one could be lifted wholesale from some unsung tale, who the hell knows?). I have by my very nature a hard time reviewing older books in the context in which they were written. If I’m going to read it now and it’s going to hold weight it needs to have something fundamentally human to hold onto, something that is beyond contemporary sensibilities and simply fits into what it is to be human.

Fortunately, this novella is filled with one: fear.

Between the doubt and terror there is nothing so existentially human as being afraid of the an unknown, especially one that seems keen on murder because, well, you are there and it’s been a while, so would you mind so terribly much just to sit there and bleed a bit for me?

And that’s it. That’s the book. The characters present, but unremarkable (as was the way of era) and the prose hold up enough to be readable in a painless pulpy smoothie. It’s not high art, it’s a story about a thing that kills other things. Enjoy it.

“You’ll dream, too, while that damned thing that Earth wouldn’t own is dripping, dripping in the Cosmos House tonight.”
― John W. Campbell Jr., Who Goes There?

Someday the words that fill my brain will fill cheap paperback books. Until then, I will collect them here.
View all posts by Tietsu →
This entry was posted in Book Review and tagged characterless, fear, horror, inspired a major motion picture, John W. Campbell, monsters, murder mystery, novella, psychological, pulp, Review, The Thing, Who Goes There?. Bookmark the permalink.