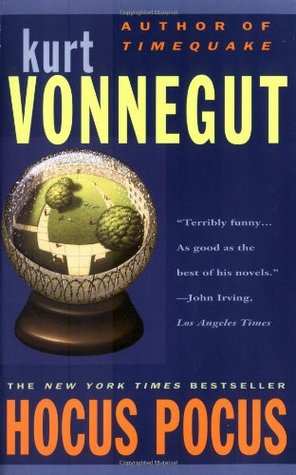 This is the newest Vonnegut novel I’ve read. I’ve been pushing off truly delving into his repertoire largely because given my love of the man, I want to savor his work like an out of production hard candy. This was the intention. Then I discovered the sheer depth of literature in the world and went wandering over there and… it’s been awhile Kurt, but given the recent success of a documentary about him on Kickstarter, I figured why not pull one from the shelf and give it a go?

Having delved into I’m honestly not sure where to go. It’s an all right Vonnegut book. It’s got the usual stuff you find his work, a casual, compulsively readable writing style, filled with the characteristic zigs and zags of word play and satirization of society, but it’s not good. Not really.

There is something that seems to happen to authors as they age. Indeed, I may be being far too exclusive, it may in fact be all persons, writer or not, but it seems to me that there comes a point in every writer’s life where the cynic takes them aground and just starts hammering the ever living hell out of them. This seems to hit satirists the most. They get bitter. The joke stops being funny, the buck has to stop somewhere and it leaves them sullen in the face of absurdity, no longer able to smile quite like they used to. I call these books the ‘old man’ books. So far I’ve stumbled upon two overtly: Cormac McCarthy’s No Country For Old Men and John Steinbeck’s The Winter of Our Discontent. They are stories where chaos seems to rule everything, and the current generation is left is left crucified on a spikes of ‘well I’ve never’.

Vonnegut ignores the babies. He’s dealt with them and he did so beautiful over fifty years ago with Mother Night, “There’s only one rule that I know of, babies—God damn it, you’ve got to be kind.” It seems it’s not the children that have gotten to him, but the state of politics within the country he spent his youth fighting for.

Here it’s lighter than the other books, I’ve mentioned. It never gets in the way of the plot, nor does it seem to derail the entire thing in a frothy diatribe of vitriol and disappointment. However, it does feel like he’s become a tired man working not out of love, but out of habit. It feels like he looked at the world one day and realized that this isn’t why he went to war. This wasn’t why those he called friends should have died. All of the warriors spat on and forgotten in Vietnam, the entire history of post-Nixon America seems to have left him over-burdened with frustration to offer the charm or the, dare I say, hopeful smile that sits in most of his previous work.

It feels like a surrender, a sort of concession of heart that Armageddon was indeed upon and if that wasn’t just a kick in the teeth.

If only, if only…

“Usually when people talk about the trickle-down theory, it has to do with economics. The richer people at the top of a society become, supposedly, the more wealth there is to trickle down to the people below. It never really works out that way, of course, because if there are 2 things people at the top can’t stand, they have to be leakage and overflow.” ― Kurt Vonnegut, Hocus Pocus