Book Review: The Golem and the Jinni by Helene Wecker 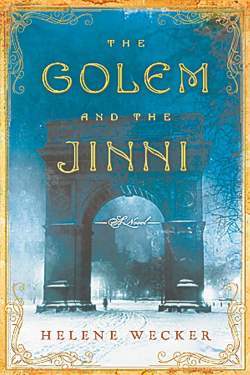 The Golem and the Jinni by Helene Wecker – Available Here

I seem to have stumbled across a niche I didn’t realize existed. The genre is simple, or not, depending on your judgment of such things: charming prose exploring an overlapping space between magic and the real, the quintessential familiar and the fantastic, the world every child adores and would surrender to if only given the choice. Sure it’s dangerous, but lots of things are dangerous, why shouldn’t some of them be magic?

At first I thought it was a genre occupied exclusively by the like of people like Neil Gaiman, but then I read Susanne Clarke and figured it must just be a 21st century British thing. And now, between The Night Circus and The Golem and the Jinni I am beginning to think it might just have to do with talent.

I know. I’m still struggling with the idea.

The Golem and the Jinni starts off as a simple one. Great care is taken in introducing and trying to establish a sort of equilibrium for characters whose entire currency of being has been lost to the underworks of societies long since abandoned to unwritten history.

It is in this time of their acclimation that the book really shines. They are human and yet through necessity they must pretend, and through chance they find each other and those irrevocably different they form a sort of desperate, largely unspoken friendship. If the book had simply been about the trials and tribulations and coming to terms with one’s identity in a world where one doesn’t quite seem to fit, I would have loved it beyond all reproach, The Minotaur Takes a Cigarette Break meets 20th century America. A tale of a supernatural servant and a chained narcissist struggling as we all struggle.

Unfortunately, that is not what happens. We are given a villain as tradition necessary. And it is a fine one at that, but he appears too sparingly that by the end of the conflict the entire event feels like two pages choked between nearly missed deadlines. Finally, when those problems are solved and the proverbial dust settles we are left with something emotionally vacant. Any death, any murder that may have taken place carries with it no real toll on the characters. Instead, the book neatly sweeps everything under the rug, settling on a pleasantly hopeful, but entirely abrupt ending.

I see the lure of it. It feels good to save those you have spent untold nights suffering over, but that doesn’t make it fit. Not here. Between these pages it feels like some tragic ending has been torn apart and rewritten in order to push it further into the distance. By our very nature we want hope when it comes to the characters that we love, we want to see that through any darkness the sun lies waiting, but in characters as maligned as these it crosses into a realm that even fantasy can save.

The book is a pleasure and as always it is a shame to see something to promising stick the landing.

“Let me see if I understand correctly now,” the Jinni said at one point. “You and your relations believe that a ghost living in the sky can grant you wishes.” “That is a gross oversimplification, and you know it.” “And yet, according to men, we jinn are nothing but children’s tales?” “This is different. This is about religion and faith.” “And where exactly is the difference?” “Are you honestly asking, or being deliberately insulting?” “I’m honestly asking.” ― Helene Wecker, The Golem and the Jinni

Someday the words that fill my brain will fill cheap paperback books. Until then, I will collect them here.
View all posts by Tietsu →
This entry was posted in Book Review, fiction, Review and tagged american literature, fantasy, golem, Helene Wecker, historical, historical fiction, jinn, literary fiction, Magical Realism, romance, The Golem and the Jinni, Wecker. Bookmark the permalink.