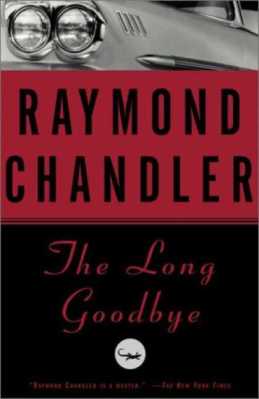 Dashiel Hammet put me off the whole hard-boiled detective/noir genre.

I’ve always loved the idea. Simplicity, attitude, and a touch of the literary. It’s a tough world, riddled with greys. What joy there is in hardening the souls of your characters into the stark contrast of black and white. Hammet turned this into a joke, a hockey, overblown affair that felt like either a form of parody or a child playing in a coat twice their size. He was pulp. And as he was considered one of the divine at the autel de noir I cast aside my copy of The Maltese Falcon and decided my love lay elsewhere.

All fine. All fair.

Until I met Chandler.

This is it. The book I wanted, exactly the way the genre should be, indeed the only way it could ever be. Cinematic, cynical idealism bled across every page. Hard men fighting harder women in an ocean of gin, scotch, and beer.

He’s a vacation without the guilt. Modern mystery books live on shelves like slab houses. Terse empty things that a strong wind could knock over. Chandler is something pristine, a writer who carries something with him. He has the mental acuity to handle the story with a style that settles smooth, like the whiskey I could never afford. It hides in its pages the honest contemplations of a writer hitting the creative free fall. It is a suffering that seems to grow and settle into a stalwart disenchantment. It is the culmination of a lifetime of drink, doubt, and no shortage of demons. So much so that this book feels like an ending. The fact it it’s not fills me with a sick sort of melancholy. It tells me that while Roger Wade found his peace, Chandler never did. It’s a poor way to live and a worse way to go. A common one, but a damn poor one just the same.

I see myself in this book. And I mean that, in more ways than I am comfortable discussing. I’m just holding out hope my demons are a little less tenacious.

“Man has always been a venal animal. The growth of populations, the huge costs of war, the incessant pressure of confiscatory taxation – all these things make him more and more venal. The average man is tired and scared, and a tired, scared man can’t afford ideals. He has to buy food for his family. In our time we have seen a shocking decline in both public and private morals. You can’t expect quality from people whose lives are a subjection to a lack of quality. You can’t have quality with mass production. You don’t want it because it lasts too long. So you substitute styling, which is a commercial swindle intended to produce artificial obsolescence. Mass production couldn’t sell its goods next year unless it made what is sold this year look unfashionable a year from now. We have the whitest kitchens and the most shining bathrooms in the world. But in the lovely white kitchen the average [person] can’t produce a meal fit to eat, and the lovely shining bathroom is mostly a receptacle for deodorants, laxatives, sleeping pills, and the products of that confidence racket called the cosmetic industry. We make the finest packages in the world, Mr Marlowe. The stuff inside is mostly junk.” ― Raymond Chandler, The Long Goodbye

Someday the words that fill my brain will fill cheap paperback books. Until then, I will collect them here.
View all posts by Tietsu →
This entry was posted in Book Review, fiction and tagged american literature, California, Chandler, classics, crime, Dectective, Hardboiled, Mexico, mystery, Noir, Philip Marlow, Raymond Chandler, series. Bookmark the permalink.