(Comic)Book Review: East of West: The Apocalypse, Year One by Jonathan Hickman and Nick Dragotta 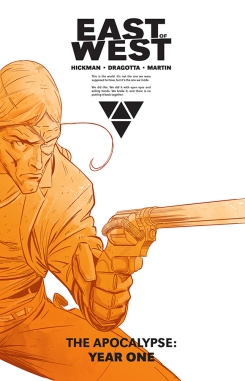 East of West: The Apocalypse, Year One by Jonathan Hickman and Nick Dragotta – Available Here

This book is like having sex the first time. It’s fast, it’s messy and in the throes of bodies smashed and thrust together you’re bound to miss some things. But in the end you’re left confused, perplexed, but unabashedly certain that whatever transpired in those brief explosive moments was worth holding onto, worth pursuing again and again and again.

It teases you, tosses you bones while staring you in the eyes, smugly certain that even with these simple scraps you have been made a slave. It’s the end of the world. A pesky, messy business drowning in imagination. Every panel, every utterance, no matter how imperfect, reflects something brilliant, something hindered only by the limits of the medium in which it expresses itself. It’s a tempest of blood, love, and loss that sticks between your teeth.

East of West. North of West. It doesn’t matter. It’s as topical and true as it is surreal.

“This is the world. It is not the one we were supposed to have, but it’s the one we made. We did this. We did it with open eyes and willing hands. We broke it, and there is no putting it back together.”