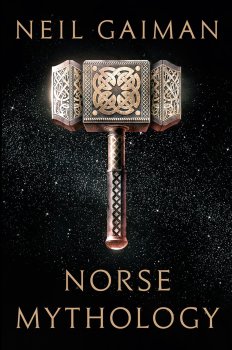 Norse mythology is old. It is all but written in the word ‘mythology’ , mythology being a belief system that we are ourselves far enough away from that pesky ghost of religion to let it joyously linger as historical artifact as opposed to twelve generation dogma.

And yet some people seem confused by Neil Gaiman retelling of Snorri Sturluson’s Prose Edda. Well, it’s not so much confused, but completely unaware the latter had every existed. No, myths were something Gaiman created and therefore because he wrote these they must be his, full cloth.

And with that bombastically illiterate set of ideas we decided to bring in the disgruntled cloacal mass of politics. You see one of the stories that makes up Gaiman’s wonderfully modern retelling of Norse Mythology is one called The Master Builder. It’s a millennia old (at least) story about Asgardians wanting to build a wall around Asgard to protect them from the various and quite formidable giants that make up the realm. A select group of people supporting the building of a wall of their very own took this to be a snide liberal mocking of their holy structure and attacked and chided him from bringing politics into his book.

Yes, Snorri Sturluson had very strong opinions about National Populist/fascist ideas. Gaiman, being the wizardy wiseman he is knew this and retold the stories to piss off the alt-right and politically neglected just to rustle the jimmies of the MAGA fans that make up some part of his readership.

So with the reactionary stupidity out in the opening I felt insulted, less at myself, but for Neil who had made something in the good faith, the any settled and well-paid creator writes anything (probably), only to have the politics of the day drag the entire gloriously thing dragged down into the mud and him being for to wrestle it from their hands with as much decorum and British wit as he could consciously use without ending up on some alt-right purge list.

This soured me that I had to reread the book. This time in text and in audio at the same time. It took a bit to sync up my readings speed to that of the audio but once done made things fly rather more smoothly.

The construction of these stories is simple. There are no long complicated thoughts of on the gods or their feeling. It has a classic Icelandic curtness that many will label as juvenile with something almost like dismissal on their breath.

But that is the secret of saga, of myth. They are simple. Episodic. The meat of them is the whole of them, making them easier to take in piece by piece until you have your version of the story lodged in your chest, which is exactly what Gaiman implores you to do with in the opening to the collection.

I read this book twice in the last month. It is short, and its narrative beats a classic and cleaver and very easy to piece into a whole tale (even if the names are often not quite as easy to lock away in your head) and thanks to Gaiman’s carefully arranging, a whole narrative. I have a feeling that if I were to read this book three more times I could have at least a quarter of it memorized and with time and beer, the rest of it as well, and if that doesn’t fit perfectly within Norse tradition I don’t know what does.

“Fair enough,” said Thor. “What’s the price?” “Freya’s hand in marriage.” “He just wants her hand?” asked Thor hopefully. She had two hands, after all, and might be persuaded to give up one of them without too much of an argument. Tyr had, after all. “All of her,” said Loki. “He wants to marry her.” “Oh,” said Thor. “She won‘t like that.” ― Neil Gaiman, Norse Mythology