Book Review: The Ten-Cent Plague: The Great Comic-Book Scare and How it Changed America by David Hajdu 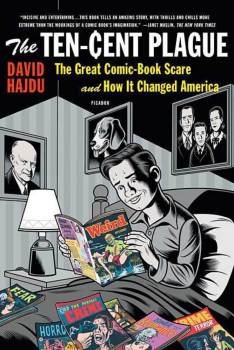 Comics used to be big business. You might say to yourself ‘Hey, wait a minute, random internet person! Comics are big business now!” It is here that I shake my head slowly and tell you that what you are speaking of is merchandising and that is a far far different thing that the comics medium itself. Comics, in their beginnings, were something different from the children’s media that had come before. And as with any new popular new thing, it was only a matter of time before it pushed itself a little bit too heavily into the mainstream and some collective of people proceeds to lose their minds.

The Ten-Cent Plague follows this journey from the birth of comics in the 1910s to the industry’s utter enslavement utter the mother hen known as the Comics Code Authority. It is a fascinating if imperfect chronicle. Acknowledging that, yes, there were dozens of dozens of comics publishers and hundreds more artists and writers involved in the industry, I am utterly incapable of coherently keeping more than six people straight in my head without being prone to stroking off everytime another incidental character is given a name and a background that may or may not be relevant to the story being told.

Still, it manages to catch the era rather well, at times you can really feel the limitless potential that publishers and creators must have felt, knowing that it was all a matter of just doing it and seeing what happens.

Capitalism leads, artistry tries to take the reins, reactionaries sends it all to so much tripe and moldy bread. A lesson in the horrifying failure of governmental overreach, brainwashing, and the acquiescence of art to the face of a generation too afraid of change to bother seeing beyond themselves.

One of those books where the people scream, “won’t somebody think of the children”, while altogether forgetting to ask children their opinions in the first place. Hajdu chronicles an artist wild West as it is pressured, bruised and beaten into zoological spectacle.

I would very much like another book, or perhaps just a longer one, one that goes farther, takes us past the crushing censorship of the 1970s and shows the erosion of the Comics Code Authority. After 400 pages focusing on the rise of demands and regulations on the comics industry, how nice it would be to be able to watch the next 40 years as publishers and creators slowly usurped and dismantled it.

“Page-one news as it occurred, the story of the comics controversy is a largely forgotten chapter in the history of the culture wars and one that defies now-common notions about the evolution of twentieth-century popular culture, including the conception of the postwar sensibility—a raucous and cynical one, inured to violence and absorbed with sex, skeptical of authority, and frozen in young adulthood—as something spawned by rock and roll. The truth is more complex. Elvis Presley and Chuck Berry added the soundtrack to a scene created in comic books.” ― David Hajdu, The Ten-Cent Plague: The Great Comic-Book Scare and How it Changed America

Someday the words that fill my brain will fill cheap paperback books. Until then, I will collect them here.
View all posts by Tietsu →
This entry was posted in Book Review, Nonfiction and tagged art, Censorship, Comic books, Comic Code Authority, communism, David Hajdu, history, politics, publishing, The Red Scare, The Ten-Cent Plague. Bookmark the permalink.