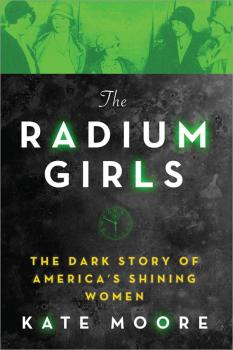 When a loved one dies there is always some(or one) among the grief stricken who are left with the task of writing an obituary. There are people at the paper, at the memorials, who can help, but the burden still settles on the shoulders of the freshly grieving: capture this life. Highlights, details as minute as they are numerous, you have to take someone loved, someone you invested your life with and turn them into text. Many of these first drafts are very very long. There is so much tragedy and heartache swimming in the waters of the mind to do anything but hope to attain a momentary symbiosis with and out of time. Like Jackson Pollock, you throw it all against the wall and hope it fits.

The Radium Girls is like that. It is a carefully written chronicle riddled with details and details of details of people all but forgotten. There is so much tragedy, so much villiany that getting it all on paper must have been like writing dozens of dozens of obituaries. Stories of young women literally breaking into pieces before being buried, their deaths hushed up until the bodies stacked a little too high and people started to take notice. Moore must have felt an almost serene sense of purpose, wanting to capture all of these lives and enshrine in something greater, something longer lasting than the small gravestones their families could afford.

And it is entirely too long because of it.

It spools off slowly, pausing to give names and dates and descriptions of the lives these girls lived, the loves that- had things gone different- they could have had. But there are too many. Too sound as brazen and crass as humanly possible: “The death of one (wo)man is a tragedy, the death of millions is a statistic.”

The scenes in the courtroom work, they are necessarily energetic and narratively forceful, but the space between them is so bogged down in moments so indulgently painted that they may as well be renaissance paintings. Every single page wants to not only inform you, but to plunge the pathological dagger deeper into your chest with such tenacity that one can only call it bias.

Do you realize how hard it is to call a book about radium poisoning bias? It is insane. Like saying the holocaust never happened or putting pineapple on pizza. It is something you say and people immediately assume you’re complaining, not because of bias but because you disagree with it. Here, it hasn’t anything to do with that, but in the incessant, clumsy attempts at emotional manipulation that drove me absolutely out of my damn mind. The Radium Girls is already a tragic story. You don’t have to try. It just is. Let it be. Narrative tricks trivialize everything.

The book is worth reading, it is an important and, with the gutting of the EPA and inevitably worker protections, possibly a prescient look at the future still in embryo as I type this.

But it needed an editor. And a more measured style. There may be some who read this and enjoys being pathologically toyed with. I will never be among them.

‘Sarah was dead—but her bones seemed very much alive: making impressions on photographic plates; carelessly emitting measurable radioactivity. It was all due, of course, to the radium. Sarah’s own life may have been cut short, but the radium inside her had a half-life of 1,600 years. It would be shooting out its rays from Sarah’s bones for centuries, long after she was gone. Even though it had killed her, it kept on bombarding her body “every day, every week, month after month, year after year.”‘ – Kate Moore, The Radium Girls: The Dark Story of America’s Shining Women

Someday the words that fill my brain will fill cheap paperback books. Until then, I will collect them here.
View all posts by Tietsu →
This entry was posted in Book Review, Nonfiction and tagged american history, Biography, corporate greed, death, history, Kate Moore, patriachy, radiation poisoning, Radioactivity, Radium, The Radium Girls, There was a time when we put radium in literally everything, women's rights. Bookmark the permalink.