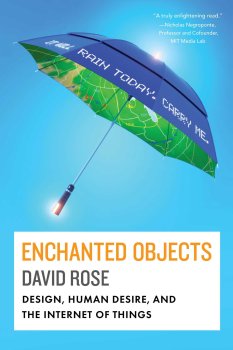 I’m only just now getting into this whole futurist thing. I’m not happy with the present so I’ve decided that I’m going to consume as many potential futures as I can and drive stoned and screaming into the one that seems most amenable to my particular brand of insanity. My first stop was in Normal, but then I decided I’d come a little closer to the third rail and get a look at the gamut of potentialities that lay sprawled in front of us.

Which brings me to the world of enchanted things.

Enchanted Objects is interesting in the way it tries to make a case for its subject. It takes a singular view of what the ‘right’ way to connect the world and weaves a sort of pleasantly worded manifesto out of it. Rose believes that the Internet of Things (IoT), a world where everything is connected online yet still fulfills a single small niche role in our lives, is the most humane option, allowing us to pry ourselves away from our black slabs (phones and tablets with their clunky and rather overwhelming interfaces). He also touches on animism (think robots) and prosthetics (think The Six Million Dollar Man), but largely with a simple overview and subsequent dismissal that at times feel more like disinterest rather than rebuttal, which is fine, Rose really hates screens and makes a very convincing case as to why we should get the hell away from them as quickly as possible.

Still, enchantment is a weird word. It comes from the late Middle English in the senses of ‘put under a spell’ and ‘delude’. This book deals with the idea of the former and I am left pondering the latter. I say that not because there is anything wrong with the book in terms of content. They way Rose writes is approachable and informal to a fault, but there is something about the book that gnaws at me and it took me weeks to pin down exactly what it was. This entire book feels inescapably bourgy. Rose spends so much time talking about his achievements and the achievements of others in his own context.

For example, the head of Google uses Rose’s glowing orb to be precognitively informed of when it’s the best time to go surfing, Rose can use a learning thermostat so his family doesn’t have to suffer the three hour indignity of waiting for their lake house to reach a comfortable temperature, and his wife can stare at the aforementioned orb to monitor their stock portfolio using a color wheel so she can call him and tell him that the sky is falling and Rose can make some trades to ease her mind. There is only really one strictly urban enchantment and that is in the, admittedly awesome, Holodeck home that raises the bed into the ceiling and allows a single room to be formatted for six different ‘activity modes’.

Maybe I’m simply annoyed at my own poverty, maybe it’s inherently bothersome that the enchanted world is an extension of the last fifty years of technological achievement in that it is available and most useful for an increasingly gated portion of society. Regardless, it chaffs and any concerns along this point are painted with the large brush of futurist optimism that seems to exist solely among those who aren’t, you know, actually poor.

“It took some time for me to understand why the smartphone, while convenient and useful for some tasks, is a dead end as the human-computer interface. The reason, once I saw it, is blindingly obvious: it has little respect for humanity.” ― David Rose, Enchanted Objects

Someday the words that fill my brain will fill cheap paperback books. Until then, I will collect them here.
View all posts by Tietsu →
This entry was posted in Book Review, Nonfiction and tagged Animism, black slabs, business, David Rose, Design, Enchanted Objects, futurism, Human Desire, Internet of Things, Invention, Robots, science, Technology. Bookmark the permalink.