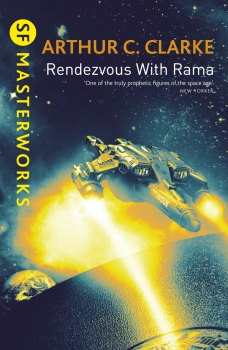 ‘No one reads Arthur Clarke for his characters; you read it for his ideas.’

This is the mantra I keep hearing with a lot of the big three in sci-fi. I can get behind that provided the ideas are big enough. That’s not fair, they don’t have to be big, they just have to be shown properly. It is a delicate balancing act building a world without giving into the impulse of telling over-showing. Unfortunately, Rendezvous with Rama takes that fear too much to heart and ends up reeling too far in the other direction resulting in a book that is fascinating in concept, but keeps far more cards than it plays.

The story hedges itself firmly around a massive spherical spaceship that is careening towards Mercury. Humanity, scattered to the ends of the solar system, elects some people to investigate. The rest is a basic action/adventure exploration of alien ship against an ever looming deadline, except for that parts that aren’t. Those pesky human parts, the things no one reads Clarke for, but for some reason he won’t stop including. There is an entire human/politic angle that is perfectly rational within the world he has built, but ends up feeling entirely pointless and seems to serve no other purpose than to shorten the amount of time exploring the endlessly fascinating alien trailer hurling through space.

The book is compulsively readable. I found myself putting aside doing actual adult(ish) things in order to see just what would come from the world of Rama, but with characters that aren’t quite cardboard and a brilliant premise that feels so under-utilized I left the world Clarke created feeling snubbed. Like somehow all of the secrets permeating the spherical hide of Rama had been written down, examined, and ultimately abandoned so that he could showcase a talent that just isn’t there.

Full Disclosure: I was also looking forward to humanity’s first encounter with the alien species to be with these masculine stone-faced behemoths. Not out of any legitimately creative impulse, but because I desperately wanted a Japanese noodle pun instead of the almost-but-not-quite ‘Raman’.

“He had a suspicion of plausible answers; they were so often wrong.” ― Arthur C. Clarke, Rendezvous with Rama