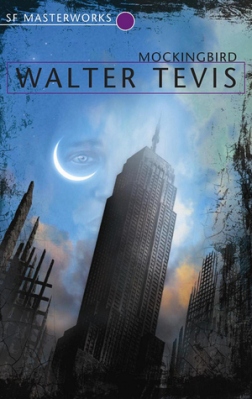 It took Walter Tevis 17 years from the published of his utterly sublime novel The Man Who Fell to Earth and the publication of his next novel Mockingbird. In that intervening time he had developed two relatively full-time jobs: professor and alcoholic. This is not to dismiss the man or his work because of a mental illness. Hell, I’m half convinced that longing to write for a living is a mental illness in its own right, but there is so much missing in the book that I am far more interested in what happened between those classes and cognac than I am in pretty much any aspect of the writing on display here. It’s like an architect decided one day that he was done drawing up plans and starting digging in the dirt to find the truth he was looking for. The entire thing reads with the snarling agedness of an author who has seen the world changing and out of a mixture of confusion and distrust of all things he doesn’t understand decided to write a book to undermine and, if all things going well, destroy it.

Mockingbird is a strange combination of Brave New World and Idiocracy. It seems to want to make some grand statement about the importance of reading, art, and humanity but is simply too dumb to pull it off. Sure it has the literary name-dropping with the likes of Joseph Conrad and T.S. Eliot in the look-what-literature-I-choose-from-this-newly-discovered-library, but that is cheap and in this case, about as subtle as your literature teacher setting fire to your copy of the latest Dan Brown book before banning you from the classroom.

Which makes a sort of sense because the book itself was apparently formulated in his mind as he was a professor and watched as, to his mind, fewer and fewer kids could, would, or cared to read. He decided this was a fine point to start a story, and (I’m guessing, with no ideas as to what the hell would happen once he got started) typed out a bunch of words about how readings is illegal and no does it anyway because all anyone does is watch TV and smoke pot all day (not kidding).

It is a simple 1-dimensional world that, for the first 70 to 80 pages could be forgiven because, well, it was only the beginning we had 200 pages to go. There are some neat, surreal moments of smiling self-immolation among the populace that had it been explored and considered by the intellectually awakened characters would have been a book that tied its themes together and remained a story of consistency instead of what it is: a book that decides to add a whole new character to the story before having them both cast to opposite ends of the country.

There’s a prison break, survivalist melodrama, and high-handed religious awakenings all of which serve the biblical fiat on personal transformation: I work hard, therefore my body becomes hard, I know bible verses and I am a newly baptized literate Christian and that gives me the moral high ground in this land of stoned idiots.

Honestly, I’m still sort of reeling from this. None of it really makes any sense to me. The book has moments of good in it, ideas that work, but so many of the notes are either flat, wrong, or an octave and instrument away from what they should be that my mind is honestly racing trying to pin down every single issue I had with it and which one broke me as a reader the hardest.

There is a sex scene that is initiated by reciting the alphabet back and forth as Paul is teaching Mary Lou to read, which was just one of those ideas that I imagine you write while drunk and sort of refuse to every touch again because of how satisfied you were at the time of writing it. But, that’s more weird than aggressively upsetting, no, I suppose the most obvious comes somewhere near the middle of the book when Bob Sopporth, the world’s smartest and blackest robot is talking to his now kinda, sorta hostage wife, Mary Lou about this that and the other thing. At one point she asks Sopporth why people stopped reading. The robot considers this for moment and then basically says, “I don’t know.”

The more astute of you will notice that earlier in this book they mentioned that reading was in fact outlawed. Both characters know this. It is mentioned numerous times. And Paul, the main character who taught himself to read despite this and then offered to teach other was told to promptly go off into an underground library and die watching silent films. It is a stupid conversation. One that serves the authors premise but not the novels established rules. This is somehow both lazy and self-indulgent. You can make some half-hearted allowances assuming you operate on the assumption that Sopporoth’s later revealed (and utterly nonsensical) plans, but that only lets the whole thing fall into a realm somewhere close to “I…I guess” and “Shut up and grab me the rum, being near you is making my head hurt’.

Also, Mark 9 robot Sopporth doesn’t have a penis. The highest class of robot humanity ever made, complete with a modified human consciousness uploaded into his brain, doesn’t have a penis. He can feel love, but no one thought that sex might somehow come up in any of this. He, in fact, doesn’t seem to have any stress relief outlets at all. He just works 23 hours a day without joy and as the last of his kind, utterly alone in the universe, loving and hating from afar. I know that it adds to his tragedy but all it would have taken was one of the men in the engineering room to look at the hyper-masculine figure they were constructing and the ten-year-old boy in every man in that room would have pointed out that particular issue.

I am now beginning to feel like if they had just started giving robots genitals and a selective number of human tasks that released dopamine into their brains, the book wouldn’t have happened at all.

So to spite Tevis and the book that took him nearly two decades to write, I offer the following morale to his story: always give your robots a penis.

“It all began, I suppose, with learning to build fires—to warm the cave and keep the predators out. And it ended with time-release Valium.”
― Walter Tevis, Mockingbird

Someday the words that fill my brain will fill cheap paperback books. Until then, I will collect them here.
View all posts by Tietsu →
This entry was posted in Book Review, fiction and tagged Brave New World, dystopia, Idiocracy, Mockingbird, Penises, religion, Robots, sci-fi, science fiction, sex, suicide, the man who fell to earth, Walter Tevis. Bookmark the permalink.