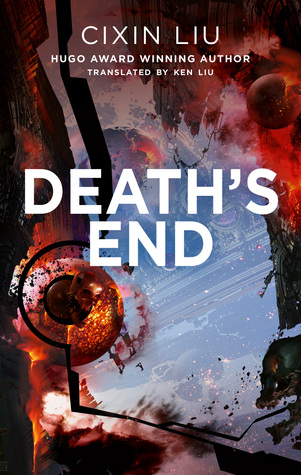 “Life is not a fairytale.”

This is the operative truth at the heart of this novel and Cixin Liu is willing to wield a four dimensional hammer to make sure that particular nail gets hammered home. This book is brutal. McCarthy’s Blood Meridian brutal. Except, unlike in Blood Meridian there is no wrapper around the violence, no roving Judge Holden in which to pin a terrifying, but fundamentally human aspect. Here, humanity is a cub dumped half-born onto a Mad Maxian highway.

There is no proper way to truly delve into that metaphor without dumping the organs of the book onto the table. Just bear in mind that what the synopsis indicates as the plot is about as on point as me saying Salem’s Lot is about a priest with a drinking problem.

It comes up, but it’s hardly the point.

The book wanders from tragedy to galactic tragedy. Where many space opera s veer gloriously into the hopeful and indulgent “Humanity, fuck yeah”, Cixin Liu looks down from the back of a fog-hidden leviathan at the children playing in the dirt of the forest and simply smirks, “No”. Gone are the thoughtful worlds built on species as equals. Like it or not you reside in the dark forest and if you want to hold a light to universe you will have to pay the debt paid by every careless prey.

Death’s End hit me the same way that I imagine Philip K. Dick hits others. It not only bends you, but threatens to break the doxa that you never knew you took so much comfort in. It is challenging, it is thoughtful, and I am exceedingly grateful that Ken Liu took the time to translate this wonderfully imaginative series. Well, two thirds of it anyway.