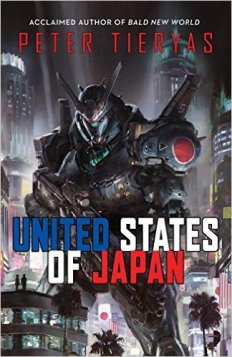 Look, I saw a book with a giant mech on it and proclaimed itself about United States of Japan. This was worth a laugh, an ‘ah, how silly’, because indeed it was silly. But then something changed. I saw an endorsement on the top of the book by none other than Ken Liu. Now, you may or may not know, but I have a sort of infatuation with his work. I may have problem, but I’m not here to talk about that right now, I’m here to talk about United State of Japan, because after reading Ken Liu’s endorsement I bought a copy.

What I wanted: A fun alt-history with lots of mech fights and anime-on-paper moments (I mean for the love of god there is a mech on the freaking cover, how could I not?). I wasn’t expecting some hyper-literary masterpiece.

A video game battle to the death that occurred literally out of nowhere and a teenage girl pilot destroying her military opponents with ease because his mother was greatest pilot that ever lived and through the power of trope was able to transfer those powers. These absurd, stupid things were my favorite because they were what I expected them to be: nostalgic schlockiness on par with Ready Player One, but written in a less sophomoric fashion.

Unfortunately this book tries to do something different. It tries to be thoughtful, it tries to be philosophic, it tries to be human. If it had done these things well, created characters that didn’t feel like narrative cudgels with delusions of independence, it might have worked out. But high concept plots and well-written characters rarely find themselves properly entangled, a writer is usually infatuated with the human or the world around it. A writer that can mesh these two things in even a semblance of balance is a bibliographic unicorn, a writer that fails in the effort is all too common.

There is a tendency among readers and critics to compare this to Philip K Dick’s The Man in the High Castle. It is a superficial comparison with about as much weight as those that declare things like ‘Writer Z is like X and Y had a child’. People see the World War II alt-history aspect and lunge to it and hold it because, I guess, people are uncomfortable with the notion that not every novel has a corollary lurking in the wild. The Man in the High Castle, for as much as I don’t care for Dick’s work, was more infatuated with concepts, people were the instruments in which he played with them, and love him or hate him, he knew what he was doing. It told a fascinating story and avoided pulling the camera too far away from his focus. There was a fog of mystery and that was never really left the novel, which worked because the details weren’t necessary and Dick knew enough to not let his imagination run too far off course (the fact that he was writing something like a book every two months probably helped ease the impulse).

Tieryas seems to want to spend as much time as possible exploring the world he has created, pushing us into restaurants and varicolored districts of human experience with characters that are neither interesting nor capable of moving more than a few notes from their manufactured baseline. There are, by necessity of plot, considerations of propaganda, authoritarianism, and the rest of the Orwellian laundry list of dystopic government tendencies, but they never rise above the less than compelling realizations that they are bad and distrusting them is probably good.

I saw a pretty looking mech on a book cover. I built a novel in my head. It was Code Geass with a decopunk shine. I wasn’t mad that I didn’t get it. If I got every book I wanted I have a feeling I would quickly grow to hate reading. In this case however, the book in my head, however vague, was better. Unhindered by dreams of literary recognition, it was a book that knew what it was and didn’t take itself too seriously. The United States of Japan has a handful of neat moments haunt a book that is neither campy enough to be schlock nor cerebral enough to be considered thoughtful.

“Life is all about lies. It’s about what you can stomach.” ― Peter Tieryas, United States of Japan