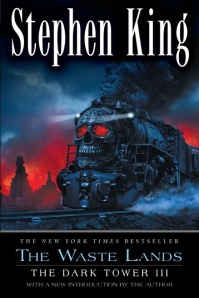 “My first thought was, he lied in every word,
That hoary cripple, with malicious eye
Askance to watch the working of his lie
On mine, and mouth scarce able to afford
Suppression of the glee, that purs’d and scor’d
Its edge, at one more victim gain’d thereby.”
– Childe Roland to the Dark Tower Came, Robert Browning

The word magnum opus gets thrown a lot in certain circles, perhaps more specifically those of the prolific and the ancient. I have always placed the term somewhere between the overzealous recommendation and ‘yeah, this book literally killed (creatively or literally) the poor soul that wrote it’. Often times this is nowhere near accurate, creativity and circumstance have more than once managed to mingle in the arms of time through the conduit of the human mind and created deep, magnificent things.

All of that nonsense being written, I’m not sure that’s what this is. The Dark Tower Series has been touted as greatest of King’s not inconsiderable output. I write this sitting comfortably in year 4 (or is it 5?) of the process of warring my way through the first book at an age that, in my youth, I swore I would be delving comfortably into the sixth. I type this with the requisite amount of envy and rage, but having traveled the first nigh 40% of the way through King’s epic, I’m beginning to the see the makings of the thing people swear by. This comes in no small part because we are as awestruck and planted at the edge of our seats as King himself. He peers like a soothsayer into some cracked crystal ball, temporal shreds flittering across fish-eyed lenses. It is a world of endless inventiveness. It is not perfect in plot, in character, or in execution, but in that rare way that imperfect parts slip and fit into the gears of something greater than itself.

There is mystery everywhere and I think it’s the lack of authorial need to immediately give details that makes it so effective. King is, too my mind, one who overwrites. A person cannot react without their motivation being spelled out so as not confuse the casual reader. There is no room for emotional of expressive ambiguity. But the world, the world in its massive, endless decay is beyond the reach of his short sidenotes and explications. You are given pieces of rancid fruit only rarely and reminded that it is not unknown just to you, but from everyone, character or writer. But we are certain, given enough and given more so that we are certain that this history was there, real and rotting as the bodies of our history’s greatest effectors.

It reads like an adventure book, but offers the questions of great fiction. It is a marathon of narrative convenience hidden beautifully in the fate-laced dopplegangers Kef, Ka, and Katet. It is fascinating from a creative perspective to see the way we wields the ways of telling her knows with things I feel he may be trying on for the first time.

It is an author writing something that he either loves or consumes like narcotic bliss, his fan-base follows suit, some distrusting that it is him writing the books at all (I had a friend claim Peter Straub actually wrote them during their time working together on The Talisman, and if you read Straub’s work…well, enough said).

This is a book that, when I sat down to read it, I felt a sort of hidden joy creep over me. Like Susanna watching Roland confronting Blaine on the monorail. It’s a smile that surprises, leaves you running your hand carefully over your face, disbelieving that it’s actually there at all.

Until you open the book and remember the monstrously strange, beautiful, and grim thing staring back at you.

Someday the words that fill my brain will fill cheap paperback books. Until then, I will collect them here.
View all posts by Tietsu →
This entry was posted in Book Review, fiction and tagged apocalypse, Child's Books, Cliffhanger, fantasy, horror, Post Apocalyptic, Riddles, science fiction, Stephen King, The Dark Tower Series, The Waste Lands, Thriller. Bookmark the permalink.