Book Review: Raw Spirit: In Search of the Perfect Dram by Iain Banks 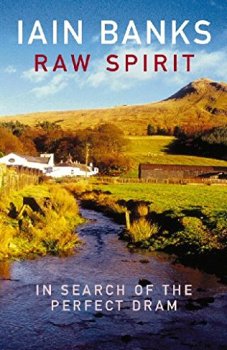 Raw Spirit: In Search of the Perfect Dram by Iain Banks – Available Here

If you picked up this book and wanted to read about whisky/dram/scotch then I have little doubt that, after reading it, you are probably more than a little disappointed. If you picked up this book because you are an Iain Banks fan then I have little doubt that you are also, quietly disappointed as well. Now if you matched either one of those previous two types and also happen to be a massive petrol head you were probably pretty a little less disappointed than everyone else because man, Banks really likes his cars.

This book is not about whisky. Whisky is the MacGuffin that a publishing house paid him a couple hundred thousand pounds to track down and who in their right mind could possibly say no to that?

Agent: “Hello, Jacob? We have news that a publisher wants you to travel the country, meet a bunch of your old friends, get trashed on rum and then write something about it afterwards.”

Me: “Will I be able to go on random tangents about current events, insert random autobiographical pieces, and go on about my own personal interests?”

Agent: “They want- they want to pay you.”

Me: *the maniac laughter of someone who just realized they are the luckiest son of a bitch in the entire world*

And so that is the idea that gets us Iain Banks only nonfiction book, Raw Spirit. It’s a Travel Log that cares about nothing so much as getting enough padding to count as a book and justify all of the expensive dram he bought for the sake of ‘research’. And this isn’t a bad thing. Banks seems to straight up tell you this is what he’s doing. Some daft person offered him money to get drunk with little oversight, Banks said yes, did that, and now he’s doing his part by writing the damn book.

And Banks is a strong writer and as full of wit as ever, but without the natural dialogue of characters he and bound to some semblance of truth, he forced to contain his imagination into the realm of the real, which is, if you are familiar the remainder of his work, must have absolutely killed him. The containment of that much manic creative energy might be what led to the page after page of sidenotes and oh-I-remembers that makes up the bulk of the book. The only problems is when you spend so much time talking about everything you end up with a book about nothing that seems desperately sure that it is, in fact, very much something.

Raw Spirit races up and down the Scottish roadside and then, mile by mile, loses all sense of inertia and purpose until I was left almost as grateful as Banks must have been after writing it. It’s not a bad book, it’s just not a good book. I might be a good travel log, I don’t frequent the genre, but travel logs are not why people read Iain Banks and much of what makes him such a fantastic writer sort of gets lost in the pace of the thing. I suppose it is nice to know that great writers—especially when it’s someone like Banks, whose skill as a writer I am desperately envious of—can fail at something, even a little. Like some sort of authorial schadenfreude tempered by the realization that the odds of me being able to get paid enough for three months work that I could spend the next nine driving around the Scottish Highlands.

“To the people who insist they really do have a great idea but they just can’t write, I’d say that given some of the books I’ve read, or at least started to read, it would appear that not being able to write is absolutely no obstacle whatsoever to writing a book and securing a publishing contract. Though becoming famous in some other field first may help.” – Iain Banks, Raw Spirit: In Search of the Perfect Dram

Someday the words that fill my brain will fill cheap paperback books. Until then, I will collect them here.
View all posts by Tietsu →
This entry was posted in Book Review, Nonfiction and tagged Dram, food and drink, Iain Banks, In Search of the Perfect Dram, MacGuffin, Mostly drink though, petrol head, politics, Raw Spirit, Scotland, travel, Travel Log, Whisky. Bookmark the permalink.