Book Review: The Future of Violence by Benjamin Wittes and Gabrielle Blum 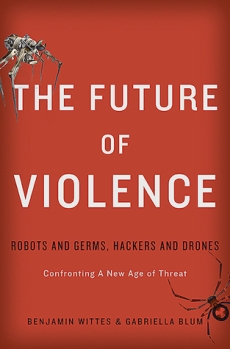 Look at the title of this book. The Future of Violence. War, war never changes, but violence? We are absolutely brilliant about coming up with ways to cause grievous harm to one another. What cool military and privatized inventions await is in the much talked about singularity of technology? I don’t know. That’s not what this book is about. The Future of Violence is more concerned about the question of violence on a societal level, which, frankly, is infinitely more interesting.

Drones, 3D printing, and genetic editing (as well as a myriad of others) are what the book calls technologies of mass empowerment, things that decrease the barrier for an individual, organization, or government’s ability to commit violence on any scale. It’s less concerned on the specifics of what it can do and more along the lines of how one could create a legal framework from responding and preventing such attacks from becoming the world’s new normal.

Wittes and Blum give a careful overview of the legal theories that have been argued in the past as well as necessity for our definition of ‘freedom’ to change in the face of these new technologies. Which is where the book gets implicitly political and is going to get a certain group of people screaming about ‘muh freedoms’ and how the government is going to go full 1984 and no amount of missile drone attacks on orphanages can justify that loss of freedom.

And they might be right. That’s why writing about the future is hard. The authors do a very good job trying to convey the possible scale of the issue without falling into fear-mongering, which is why some of their examples are…rather weak and perhaps worse, unoriginal.

There is a quote by Benjamin Franklin that is used in some circles when the idea of regulation of new tech and general surveillance: “Those who would give up essential Liberty, to purchase a little temporary Safety, deserve neither Liberty nor Safety.” Now, while the quote in context is basically just Franklin admonishing a wealthy family for refusing to pay taxes that would help pay for the defense of towns on the frontier, it’s that sixth word that often gets missed in the resuscitations of this particular bit of wisdom. Essential. In the face of these new technologies and potential catastrophes, it is that word that we all have to grapple with and define as a species in order to prepare ourselves for the future.

The Future of Violence doesn’t give any answers, it just has some options, most of which are going to be incredibly uncomfortable for the modern (American) reader, but it does attempt to open up the discussion as early as possible so that if the worst does happen we don’t go full USA PATRIOT Act and burn the house down because we saw a spider in the sink.

“This book is extremely dry and I couldn’t for the life of me find a decent quote that came across as anything but trite or like three paragraphs long.”- Jacob Kohl, reader of The Future of Violence

Someday the words that fill my brain will fill cheap paperback books. Until then, I will collect them here.
View all posts by Tietsu →
This entry was posted in Book Review, Nonfiction and tagged Benjamin Wittes, Drones, futurism, Gabriella Blum, Germs, Hackers, Military, politics, Privacy, Robots, science, terrorism, The Future of Violence. Bookmark the permalink.